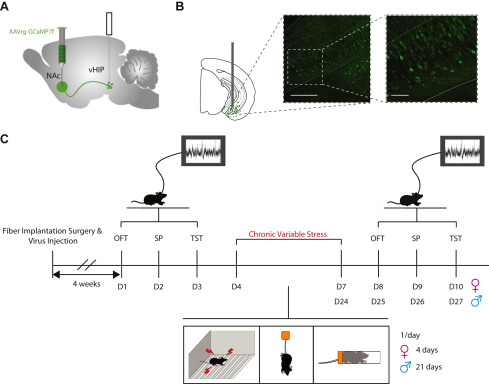 Researchers have investigated the connection between chronic stress and depression for years, and stress is considered a major risk factor for developing depression and anxiety. The current treatments for depression target symptoms, but little is known about the biological mechanisms involved in its onset and maintenance. A new study from McGill University and the Ludmer Centre for Neuroinformatics and Mental Health could change the way we understand the link between stress and depression.

Depression and Anxiety in Canada

According to the Canadian Mental Health Association, major depression and anxiety disorders affect 8% and 5% of the Canadian population, respectively, causing minor to severe impairment.

Dr. Rosemary Bagot and her collaborators from the Department of Psychology and the Integrated Program in Neuroscience of McGill University are especially interested in understanding why some chronically stressed individuals are more susceptible to developing depression and anxiety disorders while others are more resilient. The study performed in mice and published in Biological Psychiatry shows that the communication between the ventral hippocampus and the nucleus accumbens, two regions of the brain involved in our memory and reward system, can predict how the animal will react to a long-lasting stressful situation.

Using a cutting-edge technique called fibre photometry, Ms. Jessie Muir (Ph.D. candidate in Dr. Bagot’s group) measured the activity of the neurons connecting both brain regions before and after stress.

An Assistant Professor of Behavioural Neuroscience in the Department of Psychology, McGill University, Dr. Bagot is the Canada Research Chair in Behavioural Neurogenomics and an expert in animal models for depression. She is a Ludmer Centre for Neuroinformatics and Mental Health investigator and a member of the Centre for Studies in Behavioral Neurobiology.

“Using a tool called genetically encoded calcium indicators, we made the neurons that project to the nucleus accumbens emit light when they are active. The intensity of this light is something we can then measure and quantify.  We observed that mice with a higher level of activity in this pathway before stress showed increased anxiety- and depressive-like behavior after stress. Interestingly, these mice also showed increased anxiety-like behavior before stress, telling us that both brain activity and behavior can help in recognizing individuals at risk for depression ” says Muir.

Dr. Bagot describes this discovery as a potential marker of susceptibility for depression and anxiety. “We believe differences in the ventral hippocampus-nucleus accumbens pathway may make certain individuals at-risk, which could also be detected by symptoms that present before depression emerges. Identifying behaviours that signal depression vulnerability and the associated brain mechanisms is an important step towards prevention and treatment of depression and anxiety”.

The anterior hippocampus in humans corresponds to the ventral hippocampus in mice. This region has neurons projecting to the nucleus accumbens, an area of the basal forebrain involved in several cognitive functions, including motivation and reward.

About the Ludmer Centre for Neuroinformatics and Mental Health

About the Center for Studies in Behavioral Neurobiology