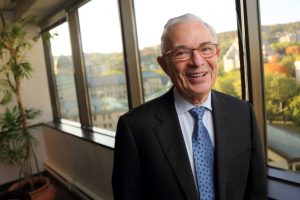 Mr. Irving Ludmer, a McGill University 1957 engineering physics alumnus, was a long-time executive with the Steinberg grocery chain and a founding partner and president of Cleman Ludmer Steinberg Inc.

After graduating in ’57, Mr Ludmer joined Steinberg Inc., where he held a number of positions, including vice-president. He left the company in 1971 to become one of Quebec’s leading real estate developers. In 1983, he rejoined Steinberg’s assuming control of its real-estate subsidiary, Ivanhoe Inc. In 1984 he became president and CEO of Steinburg’s and is widely credited with playing a pivotal role in the successful turnaround of the Steinberg grocery chain. When Steinberg’s was sold in 1989, Mr. Ludmer, Arnold Steinberg, and William Cleman formed the investment holding company Cleman Ludmer Steinberg Inc.

Mr Ludmer’s association with the McGill is long and distinguished. His studies in particle physics and his early curiosity about ‘how matter creates thought’ led to a burgeoning interest in psychiatry and, more broadly, mental health. Mr. Ludmer’s interest in both disciplines and a love of science helped shape his decision to give some $3 million in 2006 towards much-needed renovations in McGill’s Department of Psychiatry and in 2013 some $7.5 million, one of the largest donations in mental health, to established the Ludmer Centre for Neuroinformatics & Mental Health. The Centre, a unique multidisciplinary research platform, is an innovative collaboration between three cutting-edge research institutions: the Douglas Mental Health University Institute Research Centre, the Jewish General Hospital’s Lady Davis Institute for Medical Research, and McGill University’s Montreal Neurological Institute. Its ultimate goal is to significantly reduce the rates of mental illness by finding scientific methods to establish early childhood risk factors. A McGill-accredited centre, the Ludmer Centre is a key component of McGill’s strategic goal to become Canada’s centre of reference in neuroscience.

In 2015, Mr Ludmer was awarded ‘Outstanding Philanthropist of the Year’ by the Neuro.