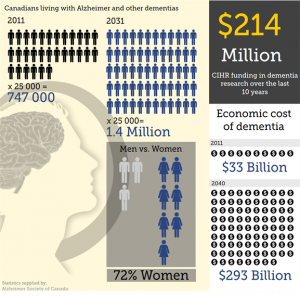 Dementias affect millions of people across Canada (right) and 46.8 million people worldwide – a number set to double every 20 years (WHO, 2015). The most common cause of dementia, late-onset Alzheimer’s disease, is not caused by a single neurological mechanism but is the product of several associated brain mechanisms influenced by an individual’s genes and lifestyle.

Neurodegenerative disorders such as dementias are a complex interaction of age and gender, genetics and epigenetics, environment and lifestyle. An understanding of these complex interactions is essential to the identification of early-detection biomarkers and the development of drug treatments that can postpone onset or even avert it, and is now, more than ever, a possibility thanks to transdisciplinary big-data approaches.

The Ludmer Centre for Neuroinformatics & Mental Health aims to advance neuroscience research through the application of big-data analytics. Our goal is to create integrative multifactorial models to explain the interactions that define both normal and abnormal brain development and, ultimately, to develop the tools that will enable doctors to determine which medications will work best for a given individual – personalized medicine approaches. This includes developing the vital data-sharing initiatives and neuroinformatics tools that make big-data analytical research possible.

This brief outlines the leadership and contributions of the Centre’s researchers, specifically Dr Alan Evans and Dr Yasser Iturria-Medina at the McGill Neurological Institute (MNI), and the neuroinformatics infrastructure creating a tipping point in our ability to advance Alzheimer’s and Dementia research.

Advanced imagining techniques (MIR, fMIR, PET) are playing an increasingly important role in basic and clinical dementia research aimed at identifying early-detection signs and disease biomarkers. Ranked among the top 1% of cited researchers, Dr Evans is a world authority on imaging technologies, brain mapping and neurological research. In recognition of this body of research in Alzheimer’s disease alone, in November 2017, the Senate of Canada awarded him the Canada 150 medal. Underpinning this research has been the gradual and systemic construction of a big-data research approach: neuroinformatics.

Understanding how neurological diseases interact with the brain’s vascular, functional and structural connectivity networks remains a challenge, complicated by the increasing number and complexity of the datasets. Extracting meaningful results is no longer possible without a big-data approach, specifically algorithms that condense complex processes and mathematical modelling that combine these diverse datasets into visual models that help us understand and theorise about disease trajectories – how, when and why they start and progress. Dr Iturria-Medina is one of the most promising new researchers in multifactorial mathematical brain modelling.

No research better exemplifies the potential inherent in a big-data research approach than the recent ground-breaking work on late-onset Alzheimer’s disease led by Dr Evans and Dr Iturria-Medina. Through a series of cumulative studies, Dr Iturria-Medina developed a mathematical model that explained how the brain pathology of Alzheimer’s disease propagates through white matter pathways. The model demonstrated that the build-up of toxic amyloid protein resulted from inadequate clearance rather than overproduction. He then used this model to analyse data from the Alzheimer’s Disease Neuroimaging Initiative (ADNI) databank, demonstrating that the earliest elements in Alzheimer’s progression involves damage to cerebral blood vessels—not only Aβ lesions, as previously believed. Dr Iturria-Medina is currently validating the multifactorial model in collaboration with an Alzheimer’s study at the Douglas Hospital. 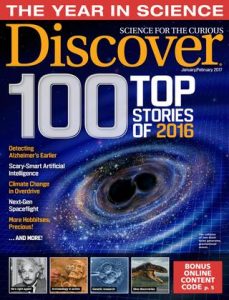 The findings have major implications for the design of Alzheimer’s interventions and move the goalpost for both early clinical identification and Alzheimer’s research. The January 2017 edition of Discover magazine ranked this research as 12th among the top 100 scientific discoveries of 2016.

Taking research to the next level

Dr Evans team intends to extend this analysis to the study of tau protein propagation using PET data. This will allow for an understanding of the different pathological processes that are associated with concurrent beta-amyloid and tau transmission as well as the interaction between them.

Dr Iturria-Medina is working on translating his mathematical modelling into a computational research tool (software package) —the Multifactorial Association Models of Brain (dys)Organization (MAMBO) toolbox — that will not only advance research in Alzheimer’s disease but also other brain disorders such as dementia, Parkinson’s,  autism,  schizophrenia, etc.

Taking this research to the next level, Dr Iturria-Medina is also finalizing research demonstrating that his mathematical model can be used to characterize individual multifaceted brain signatures – ‘brain fingerprints’ (left) – to explain why drugs work in some patients but not others. The next step will be to validate the ‘brain fingerprint’ model on a drug intervention for Alzheimer’s disease.

Over the past 30 years, research has increasingly linked moderate and severe traumatic brain injury to a greater risk of developing Alzheimer’s disease or other types of dementia years after the original head injury. Dr Iturria-Medina collaborated in a 2017 study led by Dr Sébastien Tremblay that takes the first steps toward developing an objective tool for diagnosing a history of sports concussions in ex-athletes.

To learn more about how Dr Evans, Dr Iturria-Medina and McGill researchers are using big data to advance research, watch the 2017 lecture, Alzheimer’s and Dementia Research Powered by Big Data.

Neuroinformatics technologies are what makes big-data analytics in neurosciences possible. With over 20 years invested in research and development and a dedicated team of over 30 neuroinformatics experts, no other Canadian or international initiative can match the neuroinformatics ecosystem and expertise of Dr Evans lab, the McGill Centre for Integrative Neuroscience (MCIN), nor its proven record of accomplishment for high-powered computing and analytics in brain research.

Neuroinformatics systems have to be interoperable

In order to maximise the potential in neuroinformatics technologies, the individual tools (apps) and platforms on which they run have to be interoperable: able to exchange and automatically interpret data meaningfully and accurately. To achieve this, Dr Evans helped lead the interoperability movement by providing his own neuroinformatics platform as open-source software. He also co-founded international standard-setting bodies: the International Consortium for Brain Mapping (1993) and the Organization for Human Brain Mapping (OHBM, in 1995), where he is the current Chair. In 2016, he established and currently leads the North American node of the International Neuroinformatics Coordinating Facility (INCF). McGill and the Ludmer Centre will host the 2018 INCF and 2020 OHBM conferences.

Data-sharing, the building blocks of research

Working in disciplinary silos, individual researchers, thanks to recent technological advancements, have been amassing critical datasets over a growing number of fields. Although they produce potentially promising results, the number and types of datasets collected by individual researchers are seldom complex or large enough to derive statistically significant findings. The ability to maximise the combined potential of such datasets (neuroimaging, genetics, epigenetics, behavioural, etc.), until recently, was locked away behind a culture of proprietary research and inadequate tools for data analysis.

Shared data repositories prevent data loss, increase sample size, and are critical to scientific reproducibility. They reduce acquisition costs by encouraging data re-use, thereby maximizing returns on research funding. In addition to developing the neuroinformatics platform and tools that enable today’s large-scale data-sharing initiatives to occur, for the last 20 years Dr Evans has been a leading driver of local, national and international data-sharing initiatives in Alzheimer’s and dementia research.

Through MCIN, McGill and the Montreal Neurological Institute and Hospital (the Neuro) are strategically positioned to connect Canada’s neuroscience community in Alzheimer’s and dementia-related research, both nationally and internationally.

Data-sharing in Dementia powered by MCIN