Board of Directors
To form the Board of Directors (BoD), the Executive Committee expands its membership twice annually for the mid- and end-of-year meetings to include additional members in line with McGill’s policy on research centre accreditation.

Executive Committee
The Executive Committee (ExCom) meets quarterly and is responsible for the oversight, development and sustainability of the Ludmer Centre, final approval of all operational and financial reports, and accountability to the collaborating Institutions and all donors. Two of the meeting are combined with the Board of Directors meetings.

Directorate
The Directorate is responsible for daily operational oversight and management of the Ludmer Centre and is accountable to the Executive Committee.

Donor Advisory Committee
The Donor Advisory Committee (DAC) is a non-academic advisory body whose members are committed to advancing the Ludmer Centre goals and mental health research. Members represent an invaluable pool of expertise across a broad range of areas —management, communications, business partnerships, technological development, etc.— who are committed to the success of the endeavours they invest in. These visionary leaders provide counsel and support on developing the Ludmer Centre and promoting its research to external constituencies.

The Ludmer Centre is currently building its Donor Advisory Committee membership; check back to meet our new members. 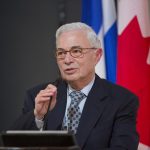 Mr. Irving Ludmer, a McGill University 1957 engineering physics alumnus, was a long-time executive with the Steinberg grocery chain and a founding partner and president of Cleman Ludmer Steinberg Inc. As the founding donor, he was instrumental in establishing the centre and is committed to supporting its growth. Read more..

Scientific Advisory Committee
The Scientific Advisory Committee (SAC) provides independent advice and guidance to the Ludmer Centre to help ensure the centre achieves its stated objectives and remains at the leading edge of research in neuroinformatics and mental health. The first SAC meeting is scheduled for Fall 2016. Revisit this page to learn who our distinguished members are for 2016.

The SAC was replaced by a Scientific Advisor in 2018, Dr Guy Rouleau.

To contact a person or an institutional member in one of the governance structures: info@LudmerCentre.ca

The Ludmer Centre was established as research project in 2013, and with the signing of a a legal agreement became a multi-institute collaboration in mid-2016 and officially became a McGill Centre in 2016.

Joanne Clark was the founding Administrative Director, Chief Operating Officer for the Ludmer Centre: She led the establishment of the Centre from June 1, 2015 to February 28, 2021