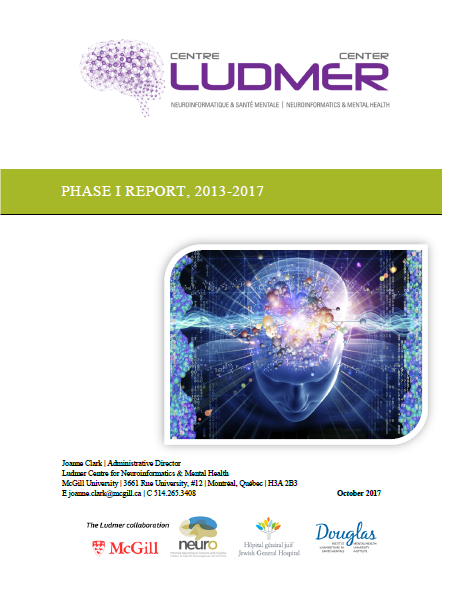 The Ludmer Centre for Neuroinformatics & Mental Health was established in 2013 to exploit new research approaches in the study of normal and abnormal brain development. This research has vast implications for understanding and treating mental illnesses, such as attention deficit, anxiety, bi-polar, depression and schizophrenia, as well as neurodegenerative disorders, such as Alzheimer’s, autism, Parkinson’s and dementia.

During Phase I, from 2013 to 2017, the Ludmer Centre established Montreal as a neuroinformatics hub by propelling a big-data research approach across three strategic and integrated axes.

Read the highlights below.

I.        Ensuring access to an interconnected neuroinformatics infrastructure and datasets.

The McGill Centre for Integrative Neuroscience (MCIN), which was initially created to process data-heavy and computationally intensive neuroimaging research, represented a solid foundation on which to build Canada’s big-data research capacities, hence, its selection as the Ludmer Centre’s neuroinformatics pillar. Supported by the Ludmer Centre, MCIN technologies have evolved into a powerful tool to explore the brain, enabling researchers to undertake computationally intensive research that combines clinical, psychological and neuroimaging data with genetic and epigenetic (modifications to gene expression) data.

By the end of 2016, MCIN’s user-base had grown to 190 virtual sites encompassing hundreds of users across 24 countries, 69% of them in Canada. MCIN technologies power 22 large-scale data-sharing initiatives nationally (13) and internationally (9), an 83% increase from 2013. These include some of the largest national and international Alzheimer’s, autism and mental health studies. Secured research grants ensure a well-funded tool-development pipeline into 2022.

As the global neuroscience community converges towards larger, real-time collaborations, MCIN and the Ludmer Centre are solidifying the position of McGill University and Montreal as part of Canada’s national neuroinformatics infrastructure. MCIN is a cornerstone of McGill University’s successful $84M grant from the Canada First Research Excellence Fund and provides the neuroinformatics infrastructure for the Tanenbaum Open Science Institute. In 2017, MCIN also received two grants ($12M) to roll out Canada’s first national neuroinformatics service, as a proof of concept. MCIN is also collaborating with multiple international initiatives to provide services or ensure interoperability (the ability to exchange and process data) with neuroinformatics initiatives in other countries. Through these and MCIN-supported data-sharing initiatives, MCIN is now strategically positioned to connect Canada’s neuroscience community to some of the largest data-sharing research initiatives in the European Union, the United States, and Asia.

II.     Leading and supporting a ‘big-data’ approach to brain research.

Building on its capacity for innovation, the Ludmer Centre’s research cadre has grown from three to 12 researchers. From 2015 to 2017, Ludmer Centre researchers delivered over 100 scientific lectures and published over 200 research papers, encompassing hundreds of collaborators from prestigious institutions across 16 countries. Key research outcomes include:

ü  The Ludmer Centre expanded data collection in two studies to include epigenetic datasets—the first globally to include measures of early-life adversity with genetic, neuroimaging and behavioural studies.

ü  Ludmer Centre researchers advanced our understanding of Autism Spectrum Disorder. They found network inefficiencies were already established in the auditory cortex in six-month-old infants. Prior to this, the earliest diagnosis was at 24 months. The extent of the inefficiency at six months also related to the severity of autistic symptoms at 24 months.

ü  Ludmer Centre researchers developed multifactorial mathematical models of disease progression that advance early-clinical identification and research into Alzheimer’s disease (AD). The first models (i) explained how the brain pathology of AD propagates through white matter pathways, (ii) demonstrated that the build-up of toxic amyloid protein resulted from inadequate clearance, rather than overproduction, and (iii) showed that the earliest elements in AD progression involve damage to cerebral blood vessels, not only to Aβ lesions, as previously believed. Discover magazine ranked the research as 12th among the top 100 scientific discoveries of 2016.

ü  These mathematical models are being translated into a software tool that will advance research in AD and other brain disorders such as Parkinson’s, autism, and schizophrenia. Current collaborations include a Spain-based Parkinson’s study, a Montreal-based autism study, and an Argentina-based brain stimulation study.

ü  The mathematical model is also being used to characterize individual multifaceted brain signatures – brain ‘fingerprints’– to explain why drugs work in some patients but not in others. The model is being validated in drug interventions for AD and depression.

Unique GxE studies and global collaborations have positioned the Ludmer Centre as a global leader in the study of epigenetics, child development and mental health. Through mathematical modelling and brain fingerprints, the Ludmer Centre has demonstrated just a small potential of the power inherent in neuroinformatics and data-sharing initiatives.

To maximize the potential of its neuroinformatics ecosystem and data-sharing initiatives, the Ludmer Centre mentors and trains new researchers. Leveraging the strengths of its research membership, the Centre has created a strong training environment that exposes young researchers to multifactorial data and neuroinformatics approaches. In Phase I, Ludmer Centre researchers welcomed 14 visiting scholars, mentored 28 post-doctoral fellows, and trained 28 students (PhD, Masters).  Drawn from a wide range of academic programs, these researchers represented the best and brightest minds from over 25 countries.

Open to all researchers, the Ludmer Centre delivered 22 meetings aimed at fostering a dynamic peer-exchange learning environment as well as nine training workshops to expand understanding and appropriate application of statistical algorithms and software packages and to foster best practices in reproducible research.

Phase I accomplishments demonstrate that the Ludmer Centre has undertaken critical steps towards establishing itself as a global research centre. It is now strategically positioned to scale up a big-data neuroinformatics approach to brain research, ensuring Montreal’s positioning as a hub for neuroinformatics leadership and innovation.